After a wet July, portions of the District left abnormally dry 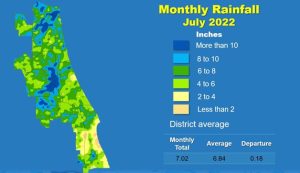 PALATKA, Fla., Aug. 9, 2022 — While some areas in the central and northern region of the St. Johns River Water Management District received more than 10 inches of rain, portions of the District, including parts of Brevard and Osceola counties, were left abnormally dry as reported in the U.S. Drought Monitor.

A full report outlining July hydrologic conditions was presented at the District’s Governing Board meeting Tuesday. Highlights include:

To learn more about rainfall totals and other hydrologic data collected, visit www.sjrwmd.com.