Finding a balance in Florida’s waters: The Minimum Flows and Levels program

Florida law requires the state’s water management districts to set minimum flows and levels (MFLs) for priority water bodies. MFLs define the limits at which further water withdrawals would be significantly harmful to the water resources or ecology of an area. The list of priority water bodies within the St. Johns River Water Management District is updated each year and is based upon the importance of the waterways and the potential for negative impacts associated with water use.

The boat skims across the water to the lake’s southern end where Nate Mouzon, a district environmental scientist, slows the boat to an idle. He points to a spit of an island where a few ibis and egrets pose regally atop the trees.

“Protection of this island is one of the criteria we are examining,” Mouzon says. “Water levels in the lake protect this bird rookery and prevent predators from accessing the island from the mainland to disturb the nests. We have to be sure that we allow for enough water to deter the predators.”

Fifteen minutes later, the trio has moved to the lake’s western shore. They drift to shore, tie up the boat and trudge through dense vegetation. Here, Environmental Scientist Stephen Jennewein, examines soil core samples while Mouzon and Raymond Deschler, also an environmental scientist, stretch a tape measure from a high ridge above the wetland down to the open water 200 feet away.

District Environmental Scientist Stephen Jennewein examines a soil core sample at Lake Weir in Marion County. He then compares the sample to a soils type chart for verification.

“We’ll record the species of vegetation and hydric or moist soil indicators to determine how often the different elevations need to flood to maintain the current vegetation we’re seeing,” Jennewein says. “Hardwood swamps, maple swamps, shallow marshes…they all have hydrologic signatures that determine where certain plant communities are found.”

The three scientists are penning the biography of Lake Weir. They’ll look at historical hydrographs of the lake and see that water levels can fluctuate as much as 9.9 feet over the entire period of recorded highs and lows. (A period of record is the length of time that continuous, reliable observations of any of the weather elements are available at a particular location.) Of course, much of this depends on seasonal rain cycles and the effects of extended drought or major storms. As part of the district’s Water Supply Planning Program, this hands-on team is helping determine the resiliency of Lake Weir to water withdrawal impacts. The data they gather at Lake Weir will help to establish one of the agency’s least-understood, state-mandated, requirements: the establishment of minimum flows and levels or MFLs. 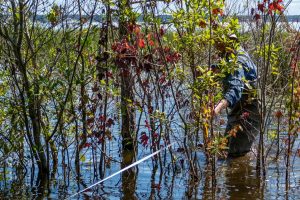 Nate Mouzon, a district environmental scientist, stretches a measuring tape from a high ridge above the Lake Weir wetland down to the open water 200 feet away from the site where Stephen Jennewein took a soil sample.

The cyclical rise and fall of the state’s water bodies is a natural phenomenon in Florida and throughout the planet. However, each water body needs a certain amount of water to properly function and retain its value. As Florida’s population grows so does its demand for clean water. While the majority of potable (drinkable) water is sourced from the state’s aquifers, water withdrawals from both underground sources and surface water can impact water levels in lakes and flows in rivers and springs.

Maintaining a balance between the needs of people — drinking, bathing, irrigation, agriculture, industry — and the environment is part of the district’s mission. To call it a tall order is an understatement, especially when working within the confines of a waterway’s highs and lows. District scientists may have to determine, for example, the volume of water a public utility can draw from a lake without causing environmental harm for that lake or the amount of groundwater that can be pumped without affecting a nearby spring’s flow. Are there sensitive environmental features that can help determine the duration and frequency of high or low water levels that a lake can withstand? The MFLs program works to answer these questions and uses this information to establish protective environmental thresholds that set limits for consumptive water use, explains Dr. Andrew Sutherland, technical program manager of MFLs in the district’s Bureau of Water Supply Planning.

“The MFL limit is based on establishing a protective minimum lake level (or river flow),” Sutherland says. “Field-based environmental assessments and scientific literature are the basis for each MFL determination. MFLs define the minimum amount of water necessary to sustain relevant environmental values over the long term. As such, they provide important information to guide the district’s water supply planning and permitting programs.”

Water bodies naturally fluctuate depending on climatic factors. Water withdrawals have the potential to affect this natural cycle. Unrestrained pumping could cause a water body to drop below critical levels for too long a period of time to adequately support ecological functions or human uses.

The district has set nearly 130 MFLs for priority lakes, rivers, wetlands and springs since initiation of the MFL program in the mid-1980s. For each priority water body, the district collects and analyzes large amounts of information, including historical water levels and/or flow rates, water quality data, and wetland vegetation data. Complex hydrologic, hydraulic and groundwater modeling is also conducted as part of the MFLs determination and assessment process.

So, what exactly are the criteria for determining MFLs? The district relies on a suite of 10 important water resource values (see accompanying information box). For the majority of priority water bodies, the most sensitive criteria used for MFLs are related to the protection of fish and wildlife. At Blue Spring in Volusia County, for example, MFLs were set to sustain the spring’s wintering manatee population; in other water bodies, it might be the nesting habitat of imperiled birds or the protection of adequate water depths for boat navigation.

“Each water body is unique and we tailor our analysis to that particular natural system using the best scientific information available,” Sutherland explains.

Field work is only part of the effort necessary for setting MFLs. At the district’s headquarters, experts also use surface water and groundwater models to simulate long-term hydrologic conditions, assess the relative effects of climate and groundwater withdrawals on water bodies and to evaluate whether MFLs are being met. Additionally, models are used to evaluate management options for systems that are not currently meeting or are projected to not meet their MFLs in the future.

Due to the complexity and thoroughness of the work involved in setting an MFL for a water body — including modeling, peer reviews and public input — arriving at a final determination can take many months to more than a year.

Adding to the complexity, an MFL is based not on a single allowable high and low water level, but a  pattern of highs and lows set for varying durations. It all goes back to the requirements of that particular spring, river or lake.

“The number of MFLs developed for a given water body depends on site-specific characteristics and the environmental criteria that require protection,” Sutherland says. “Typically, we examine criteria that represent high, average and low components to ensure we protect the entire ecosystem and all relevant beneficial human uses.”

Once the analyses have been completed and the appropriate MFLs evaluated, an assessment of the effects of current and future withdrawals on the water body is performed. The MFL criteria that are the most sensitive to withdrawals become the basis for the adopted MFL. For example, the district set a minimum flow at Blue Spring in Volusia County to protect winter refuge habitat for the St. Johns River manatee population. Because manatee winter refuge requirements are the most sensitive criterion, the resulting Blue Spring MFL also protects the habitat for numerous other species of invertebrates, fish, reptiles and birds.

Precautions are taken for water bodies that are below their minimum flow or level or are projected to fall below it within 20 years. In these cases, Florida’s water management districts are required to implement a recovery or prevention strategy to ensure the MFL is maintained over the long term. A prevention or recovery strategy identifies projects and measures and sometimes includes a regulatory component. Among the solutions available are enhanced conservation, aquifer recharge, development of alternative water supplies, and expansion of reclaimed water systems.

When a regulatory component is necessary, in conjunction with projects and measures to achieve the MFLs, new rules are adopted to assist in protecting MFL water bodies. The rules might limit groundwater withdrawals in order to reduce or mitigate impacts to MFLs.

The district updates its MFLs priority list annually as required by the state. The priority list is based on the importance of the waters to the state or region and the potential for significant harm caused by withdrawals to water resources or ecology. It includes waters that are experiencing or may be expected to experience adverse impacts because of existing or future water withdrawals.

The MFL Program is as fluid as the water it protects, with district scientists dedicated to the in-depth work necessary to set MFLs and revisiting them regularly to ensure Florida’s water resources remain robust now and in the future. Controlling your controller, who’s the boss?