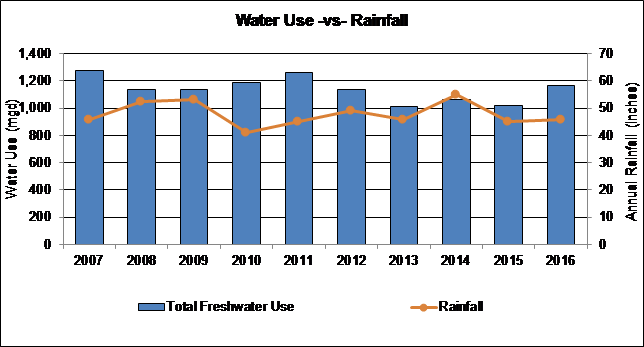 PALATKA, Fla., June 13, 2017 — Annual reporting conducted by the St. Johns River Water Management District shows that total water use was approximately two percent above the 10-year average, and was 14 percent higher than 2015, while total population increased about two percent. The district’s 2016 Survey of Annual Water Use was presented at the district’s June Governing Board meeting.

“On the heels of an unusually dry year, water conservation remains a crucial tactic to ensure sustainable use of Florida’s water,” said St. Johns River Water Management District Executive Director Dr. Ann Shortelle. “We commend the efforts of citizens, local governments and all water users who make water conservation a year-round priority. No action is too small.”

At less than 46 inches, 2016 was the fourth driest year in the last decade and one of the driest of the last five years.

Data collected shows that public supply continues to account for the greatest total water use within the district. Between 2007 and 2016, public supply water use decreased by 6 percent (from 611.47 million gallons per day (mgd) to 575.29 mgd), while the population served by public supply increased approximately 3 percent (from 4,081,029 to 4,218,862 persons).

Factors such as conservation, less landscape irrigation with potable water and increases in multifamily housing occupancy can decrease gross per capita rates. Conversely, expanded tourism and other commercial development, larger irrigated lots, and increases in single family housing can increase gross per capita rates. Since 1978, population increased by 189 percent while public supply water use increased by 146 percent.

The district has published annual water use data since 1978. These “annual water use surveys” assess total water use, with data arranged by source, category of use, and county. Water Use amounts are based on the best available data at the time of publication. Published reports can be found on the district’s website, www.sjrwmd.com.