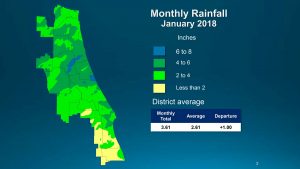 More information about the district’s hydrological conditions can be found online at www.sjrwmd.com.