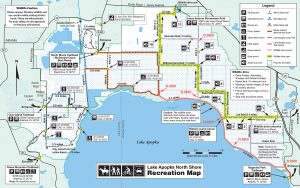 MAITLAND, Fla., March 2, 2018 — The St. Johns River Water Management District will begin regrading the roads of the Lake Apopka Wildlife Drive beginning Monday, March 5, 2018. Weekend access will not be affected by the regrading project, which will take place Monday through Thursday each week.

Each week all roadways will be cleared of equipment and materials on Thursday afternoon to allow public access to the drive on Friday morning.

The district continues to make necessary repairs to the wildlife drive and Lake Apopka Loop Trail following severe flood damage from Hurricane Irma last September. More than seven miles of the popular wildlife drive have reopened since repairs were made.

Sections of the Loop Trail between Lake Level Canal and Magnolia Park remain closed while the levees on which the trail is located are repaired.

The Lake Apopka Wildlife Drive is open year-round between sunrise and sunset on Fridays, Saturdays, Sundays and federal holidays. There is no cost to visit the wildlife drive.

Trail guides, maps and more information about recreational opportunities on lands owned and managed by the district are available at www.sjrwmd.com/lands/recreation.