March rainfall below average across the district 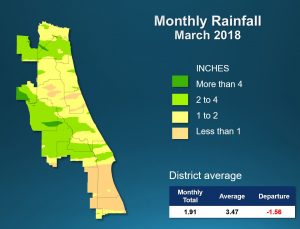 VIERA, Fla., April 10, 2018 — Hydrologic conditions within the St. Johns River Water Management District show that while the aquifer is still benefiting from last year’s rain, things are starting to dry out, especially in Orlando and the Upper St. Johns River Basin.

Rainfall during March was below average across the district. The southernmost region of the district had the least rainfall, with Osceola, Indian River and the southern half of Brevard County receiving less than one inch during the month.

Despite experiencing below-average precipitation, 12-month rainfall totals are still above average throughout the district due to the high rainfall totals of last summer and Hurricane Irma. Districtwide, the total is eight inches above average. However, the central region, including Seminole, Orange and Osceola counties, is now approaching the long-term annual average.