April’s showers nearly double the average rainfall for many counties 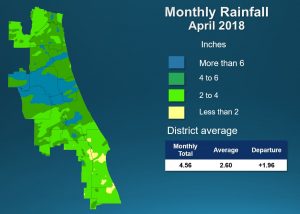 PALATKA, Fla., May 8, 2018 — All counties in the St. Johns River Water Management District’s service area experienced higher-than-average rainfall during April, with several counties seeing twice their average. This is a departure from last year’s data, when rainfall was trending significantly below average. A full hydrological report was presented today during the district’s governing board meeting.

April’s showers brought the 12-month rainfall total to above average, with a zone of very high rain running through northern Alachua, most of Putnam, southwest St. Johns and northwest Flagler counties. Districtwide, the annual rainfall total is more than 11 inches above average.

The southernmost part of the district, including Indian River, Osceola and portions of Brevard County, all had average rainfall, ranging from 2.4 to 2.7 inches.