Statewide soaking brings double the rain during May 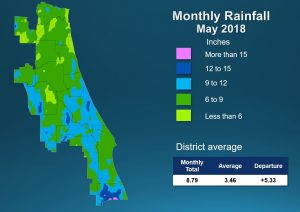 For the month of May, the districtwide rainfall total was 8.8 inches compared to the average of 3.5 inches. This is a departure from last year’s data when rainfall was trending significantly below average.

While May’s rainfall has been reported as record setting, it wasn’t record setting in all areas of the district, with weather stations in Jacksonville, Orlando, Daytona Beach and Vero Beach having recorded more rain in prior years.