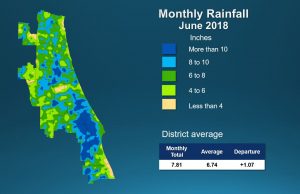 PALATKA, Fla., July 10, 2018 — While rainfall has not reached record-breaking levels, June continued a trend of higher-than-average rainfall for counties within the St. Johns River Water Management District. A full hydrological report was presented during today’s governing board meeting.

The district has received above-average rain for nine of the past 12 months, with areas of unusually high rainfall in parts of St. Johns, Flagler and Brevard counties. The districtwide 12-month rainfall total is 13.5 inches above average.

Flagler County had the highest 12-month rainfall total, with 72 inches.

Seminole County had the highest monthly rainfall, at 8.8 inches, followed by Putnam, with 8.7 inches, and Brevard, with 8.6 inches.

Even the driest counties, which include Alachua, Bradford and Indian River, experienced more than 6 inches of rain during June.