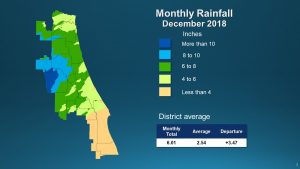 PALATKA, Fla., Jan. 15, 2019 — Data collected by the St. Johns River Water Management District shows rainfall during December 2018 as a mixed bag depending on whether you live in north or central Florida or in the district’s southernmost counties. Rainfall was above average in most areas, except for a zone of below-average rainfall in the district’s southernmost counties.

A full report outlining hydrological conditions was presented at the district’s January Governing Board meeting.

Less than four inches of rain was recorded during December in Brevard, Indian River and areas of Osceola, Orange and Okeechobee counties where the district collects data.