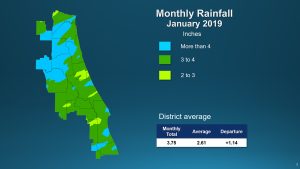 ORLANDO, Fla., Feb. 12, 2019 — Rainfall during January 2019 was above average across the 18 counties of the St. Johns River Water Management District. A full report outlining hydrological conditions was presented at the district’s February Governing Board meeting, held offsite today at the University of Central Florida.

According to district data, even the southernmost counties, which are currently experiencing drought conditions, recorded an increase in rainfall. With this rainfall, surface water flow conditions in the Upper St. Johns River Basin briefly rebounded slightly from the extremely low flow conditions in December.

Other highlights from the hydrologic conditions report for January 2019 are: