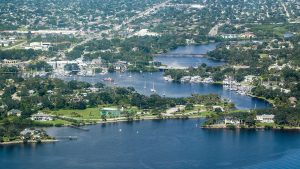 PALATKA, Fla., March 8, 2019 — With more than 600,000 cubic yards of muck already removed from the Eau Gallie River in Melbourne, the St. Johns River Water Management District is scheduled to embark on the final leg of dredging on March 11.

“Dredging has a positive impact on water quality on the Eau Gallie River, the fish and wildlife it supports, and all who use and love this waterway,” said St. Johns River Water Management District Executive Director Dr. Ann Shortelle. “Decades of deposited muck have been removed in just two years. The acceleration of this project is keeping with Governor Ron DeSantis’ executive order focused on rapid improvement for water quality and the Florida Department of Environmental Protection’s commitment to tackling this issue statewide.”

Because the final phase of dredging will occur while manatees are active, the district is implementing robust measures that include additional manatee watchers who will shut down dredging if a manatee is sighted and a larger required buffer zone between the dredger and sighted manatees. The stricter regulations have been reviewed and permitted by the Army Corps of Engineers and U.S. Fish and Wildlife Service.

Muck is a mix of fine-grained sediments, sand, clay and organic matter in untreated stormwater runoff that drains to canals and storm drains connected to tributaries in the lagoon, including the Eau Gallie River. Muck can accumulate nutrients that contribute to algal blooms and create detrimental conditions for seagrasses and organisms vital to the lagoon’s aquatic food chain. In some areas of the Eau Gallie River, the muck was 12 feet deep.

Dredging began in February 2017, when dredgers began pumping muck from the Eau Gallie River — a tributary of the Indian River Lagoon — to a storage facility on property owned by Brevard County. When work is completed, more than 625,000 cubic yards of the gooey black muck will have been dredged from the river.