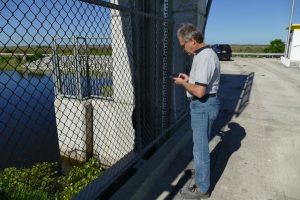 With the arrival of hurricane season on June 1, the St. Johns River Water Management District is more than ready for the worst Mother Nature may dish up this storm season.

“We’ve recently reached a technological milestone in operating our flood control structures in the Upper St. John River Basin and Moss Bluff Dam,” said St. Johns River Water Management District Executive Director Dr. Ann Shortelle. “We have the ability to operate flood control structures from remote locations using a computer, tablet or even a cell phone. This allows us to adjust water levels prior to or during a hurricane without risking the safety of our staff.”

Each year, the district’s experienced staff participates in statewide disaster preparedness training with Florida’s emergency officials. The agency has also weathered many hurricanes and tropical storms, assisting local governments and communities before and in the aftermath of devastating storms, most recently Hurricane Michael in 2018, Hurricane Irma in 2017 and Hurricane Matthew in 2016. A list of local government flooding contacts is available on the district’s website at www.sjrwmd.com/localgovernment/flooding. Visit the district’s webpage at www.sjrwmd.com/storm for more hurricane and flooding information. Additional information is available on Florida’s Division of Emergency Management website at floridadisaster.org.

According to the National Oceanic and Atmospheric Administration, most initial forecasts project that the number of storms will be above average, and several forecasts indicate an above-average likelihood that a major hurricane will make landfall in the Caribbean, the Gulf Coast, or the U.S. East Coast.