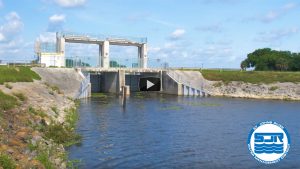 What you can do: Maintain your stormwater system before hurricane arrives

As Hurricane Dorian begins to bring heavy rainfall to Florida’s east coast, it is important to understand what these water control structures, as well as district-permitted stormwater systems, can and can’t do.

The USJRB Project has proven itself several times over the past two decades, protecting the region from flooding during hurricanes Matthew in 2016 and Irma in 2017, as well as the unprecedented 2004 hurricane season. But as with any flood protection project, there are limits to the level of flood protection benefits and the areas benefited by the project.

The USJRB Project does not reduce flooding in the river’s middle basin in east-central Florida, including lake Monroe and Harney, nor further downstream in the river’s lower basin in north Florida. This is because tributaries such as the Econlockhatchee River drain much more water to the middle St. Johns River than the amount that can be drained from the headwaters. Also, middle basin tributaries do not have comparable flood control facilities as are used in the upper basin.

What you can do

If you are experiencing flooding, immediately contact your local government. Local governments are the primary entities responsible for emergency responses during storms, such as implementing state-of-emergency declarations, evacuations and rescue efforts during flood-related disasters.

Understanding that water control structures do not address flooding in the middle or lower St. Johns River basins, the best time to prepare for the storm is before weather conditions begin to deteriorate. Maintenance of a neighborhood stormwater system will help homeowners be ready for copious rainfall associated with many tropical systems.

Stormwater systems, like natural ponds or wetlands, help control flooding by slowing down surges and absorbing rainwater before it reaches water bodies. They also help filter out nutrients and sediments collected by storm water as it runs over the earth’s surface before pollutants can reach natural waterways.

Maintenance may include clearing or cleaning inflow/outflow structures, removing nuisance and excess vegetation, repairing eroded slopes, and cleaning up trash and yard waste in your yard and gutters and around storm drains. The district’s website contains a section on stormwater systems and how they work that addresses the most effective methods of keeping stormwater systems working properly.