An overabundance of gizzard shad contributes to perpetuating degraded water quality in lakes such as Lake George. 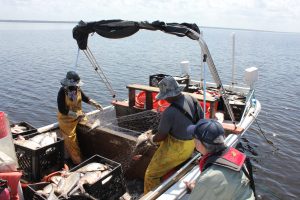 An overabundance of gizzard shad contributes to perpetuating degraded water quality in lakes such as Lake George.

“Gizzard shad removal is a cost-effective tool to remove nutrients from Lake George,” said St. Johns River Water Management District Executive Director Dr. Ann Shortelle. “We appreciate our Governing Board’s commitment to funding turnkey projects such as this to improve the health of the St. Johns River system, and we thank Gov. DeSantis for making water quality protection one of his highest environmental priorities.”

In response to the governor’s executive order and emerging algal blooms in the lower St. Johns River, district staff identified shad harvesting as a rapid and effective way to reduce phosphorus in the lake, part of the St. Johns River system. Staff identified unspent funds and the agency’s governing board approved the Lake George harvest at its May meeting.

The gizzard shad harvest took place from June 4 to July 16 and removed 628,173 pounds of the rough fish from Lake George, which directly removed thousands of pounds of nutrient pollution from the lake. Removing large numbers of shad from a waterbody removes the nutrients contained in the fishes’ bodies.

Gizzard shad feed on algae on the bottom of the lake, stirring up sediments and clouding the water. Shad excrete nutrients back into the water, recycling nutrients from the bottom that can feed more algae. Thus, by removing these fish, additional nutrients will not be recycled into the lake to impair its water quality.

Harvesting gizzard shad from Lake George is conducted during warmer months to avoid potentially catching untargeted species, including American shad, a species that is managed and protected under the Atlantic States Marine Fisheries Commission.

The district works with commercial fishing vendors to net gizzard shad. Sport fish caught in nets during the harvests are immediately released. The program is permitted and monitored by the Florida Fish and Wildlife Conservation Commission.