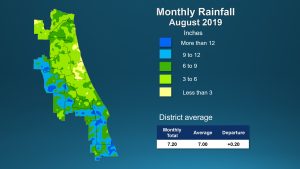 PALATKA, Fla., Sept. 10, 2019 — Data collected by the St. Johns River Water Management District shows August 2019 rainfall was above average districtwide. Additionally, in a flipflop of recent months, Indian River County, which has been below average for many months, had the highest countywide rainfall total, with 10.2 inches.

A full report outlining hydrological conditions was presented at the district’s September Governing Board meeting.

Coastal central Florida continues to experience below-average rainfall. Flagler County had the district’s lowest monthly rainfall total at 3.3 inches for August, and Alachua and Marion counties were well above average for the month with nearly 10 inches of rain.

While more analysis will be included in next month’s report, Hurricane Dorian brought between 1–3 inches of rainfall across the district in early September, except for a narrow band of 4–5 inches in Flagler, western Volusia and northeast Lake counties.

For the past 12 months, Indian River County has the lowest cumulative total at 41 inches, despite its 10.2 inches of welcome rainfall in August. Marion County has the highest 12-month total, at 58.9 inches.

Other hydrologic highlights include: