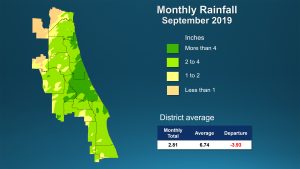 PALATKA, Fla., Oct. 8, 2019 — Typically one of Florida’s wettest months of the year, this September was drier on average, according to data collected by the St. Johns River Water Management District, and drought conditions are developing in north Florida, with Baker County experiencing severe drought.

A full report outlining hydrological conditions was presented at the district’s October Governing Board meeting.

Every county within the district received well-below-average rainfall in September, and much of the rainfall was associated with Hurricane Dorian early in the month. Baker, Alachua and Nassau counties received the least rainfall, while Flagler had the most rainfall with 5 inches, still well below the average for September.

Alachua, Clay, Duval, Putnam and St. Johns counties are abnormally dry, while Nassau County is in moderate drought and Baker County is in the severe drought range.

As a consequence of the very low September rainfall, surface water flows on Oct. 1 were much lower than at the start of September. The St. Marys River and the Wekiva River dropped into the very low flow range, while the Econlockhatchee and St. Johns River near Melbourne fell into the low range.

Other hydrologic highlights include: