Fish kills: Know who to call, what you can do to help 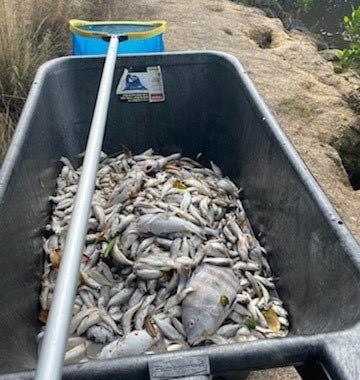 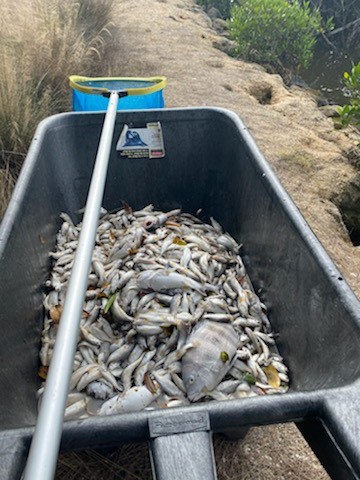 Localized fish kills have been reported in the Indian River Lagoon in Brevard County.

PALM BAY, Fla., Nov. 28, 2020 — The St. Johns River Water Management District and other partners have received several reports of localized fish kills in the Indian River Lagoon over the past few days. District staff, along with Brevard County, the Florida Fish and Wildlife Conservation Commission (FWC), Florida Department of Environmental Protection (FDEP), Indian River Lagoon National Estuary Program and others, are investigating. Preliminary information suggests that low dissolved oxygen concentrations may be the cause. Low oxygen concentrations (below 2 milligrams per liter or 30% saturation) often arise during an algal bloom like the one that has been occurring in the Indian River Lagoon.

District scientists routinely collect samples of water and algae, and analytical results are provided to other agencies, including the Florida Department of Health, FDEP and FWC. Since 2009, these agencies have operated under a plan that coordinates their responses to potentially harmful algal blooms.

To report an algal bloom, visit the FDEP website, floridadep.gov/AlgalBloom.

While the District has partnered with state and local governments to implement dozens of projects that restore water quality and the health of the lagoon, the public also plays a vital role in reducing nutrient pollution, which decreases the likelihood of harmful algal blooms, the possibility that those blooms will reduce levels of oxygen, and the subsequent potential for fish kills. Citizens may wish to collect and dispose of the dead fish found along their waterfront property if it is safe to do so. This will help keep the nutrients in the decomposing fish from being released into the lagoon to fuel algal blooms. For more information on fish kills and to report a fish kill, visit FWC’s website at myfwc.com/research/saltwater/health/fish-kills-hotline/.

To further reduce nutrient pollution, use fertilizers (which contain nutrients) only according to manufacturer directions and avoid using fertilizers just prior to rain. In addition, properly maintain stormwater systems, keep leaves and grass clippings out of storm drains and connect to a central sewer system where possible.