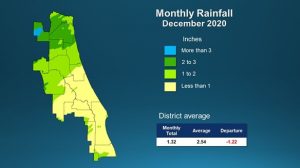 PALATKA, Fla., Jan. 12, 2021 — Many counties across the St. Johns River Water Management District had a very dry December, with the southern half of the District receiving less than an inch of rainfall over the month.

To learn more about rainfall totals and other hydrologic data collected, visit sjrwmd.com.