The District and city of Palatka are partnering on a $2.8 million cost-share project, part of a multi-phased effort to update the city’s aging water distribution system. 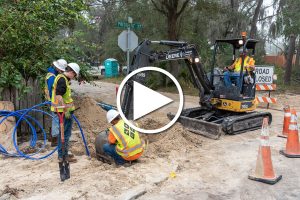 The District and city of Palatka are partnering on a $2.8 million cost-share project, part of a multi-phased effort to update the city’s aging water distribution system.

District and city partnering on a new $2.8 million phase downtown and in eastern Palatka Heights

PALATKA, Fla., Feb. 17, 2021 — Construction has started on a project to replace old cast-iron water pipes in the city of Palatka’s central downtown and eastern Palatka Heights communities, part of the city’s multi-phased effort to update its antiquated water distribution system. The St. Johns River Water Management District and city are partnering on this latest $2.8 million phase of the improvement project.

“The city’s current cast-iron water pipes in the downtown area are between 85 and 130 years old,” said St. Johns River Water Management District Executive Director Dr. Ann Shortelle. “This project will reduce water loss caused by leaks and breaks and will flush out clogged lines to improve water pressure for fire suppression and to ensure high quality water is piped to homes and businesses. We are committed to helping Rural Economic Development Initiative (REDI) community partners on great projects such as this one to reduce water waste and protect our water resources.”

Currently, about 15 percent of city water is lost through old, failing infrastructure. Of 90 miles of potable water main that needs to be replaced within the city, about 18 miles of water lines have been replaced or are scheduled for replacement, with more phases planned.

“We’ve estimated that approximately 66 miles of our water lines are past their useful life,” said Palatka General Services Director Jonathan Griffith. “As a community, being able to offer well-planned, cost-effective and environmentally sustainable infrastructure and services is paramount. Thanks to our partnership with St. Johns River Water Management District, we’re finally gaining traction.”

This phase of the project includes replacing approximately 35,532 linear feet of aged and failing cast-iron pipe with PVC, completing the downtown central (phase IV) and eastern Palatka Heights (phase VII) sections. The project area contains some of the oldest water mains in the city, dating back to 1886.

Once the new system is in place, the city anticipates an immediate increase in water conservation and water quality within the project area. Currently in the project area, approximately 7 million gallons of water per year is lost through leaks, breaks and the excessive flushing needed to reduce bacteria and contaminants often found in aged cast-iron pipes. The completion of this phase will immediately conserve an estimated 6.5 million gallons per year, due to lowered flushing requirements of newer PVC pipes and fewer instances of breaks and leaks.

Of the city’s overall potable water line replacement project, three previous phases have been funded through the District’s cost-share program for REDI/Innovative projects, through which approximately 16,700 linear feet of potable water lines have been replaced, resulting in 0.44 million gallons per day of water savings.