PALATKA, Fla., July 28, 2021 — Annual water use reporting conducted by the St. Johns River Water Management District shows that 2020 total water use was 1% lower than the five-year average but 4% higher than 2019. Daily per capita water use at 115 gallons per day remained below the 10-year average of 128 gallons. 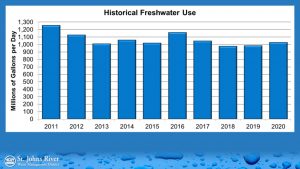 The District’s 2020 Survey of Annual Water Use was presented at the July 13 Governing Board meeting.

“Changes in rainfall, greater access to reclaimed water and economic factors all play a role in the results of our annual reporting, but each of us individually has control over our own water use behaviors,” said St. Johns River Water Management District Executive Director Dr. Ann Shortelle. “This yearly report is a great reminder that we all must keep doing our part to conserve water in our homes and businesses.”

Within the St. Johns District, the largest water use is public supply, which represents 53% of total water use, followed by agricultural irrigation at 23% and commercial/industrial/institutional and mining/dewatering uses at 9% of water use. Other categories of water use are domestic self-supply and small public supply systems (7%), landscape/recreational self-supply (5%) and power generation self-supply (3%).

Highlights of the report include:

The District has published annual water use data since 1978. Annual water use surveys assess total water use, with data arranged by source, category of use, and county. Water use amounts are based on the best available data at the time of publication. The published report can be found on the District’s website at www.sjrwmd.com/documents/water-supply/#water-use-data.