PALATKA, Fla., Jan. 10, 2023 — December rainfall was less than half the average for this time of year throughout the St. Johns River Water Management District’s 18-county region. As a result, moderate drought conditions are developing in Baker, Nassau and the western half of Duval County according to the U.S. Drought Monitor.

A full report outlining December’s hydrologic conditions was presented at the District’s Governing Board meeting Tuesday. Highlights include: 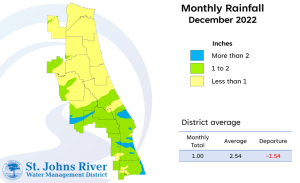 To learn more about rainfall totals and other hydrologic data collected, visit www.sjrwmd.com.