Create your own user feedback survey
Skip to main content 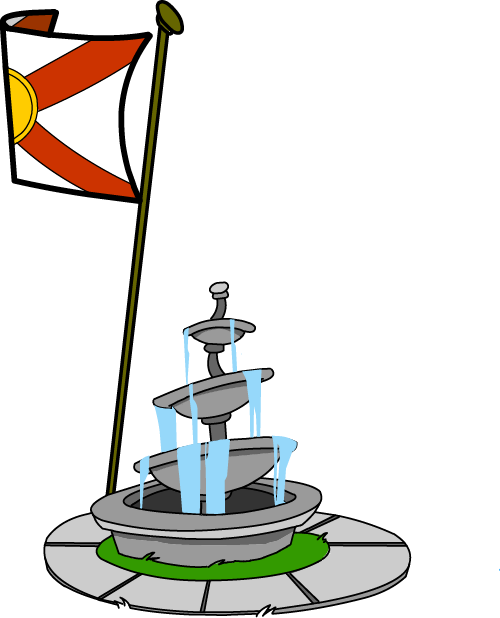 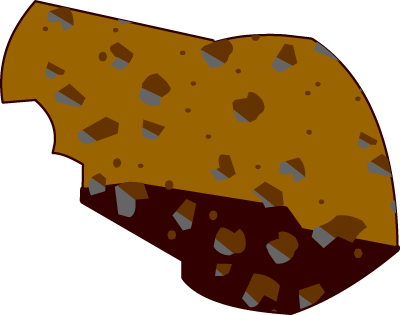 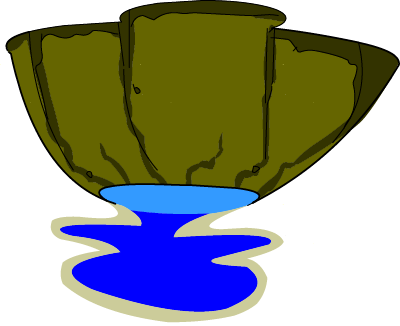 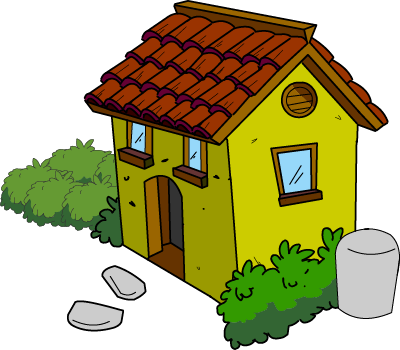 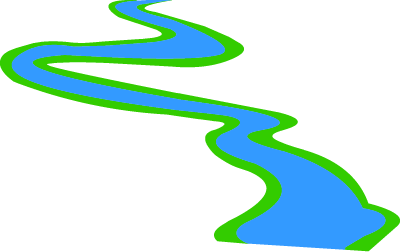 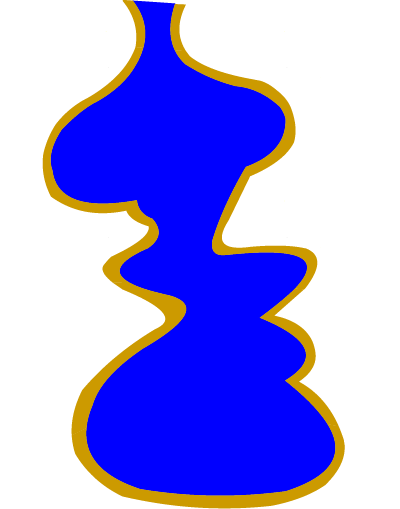 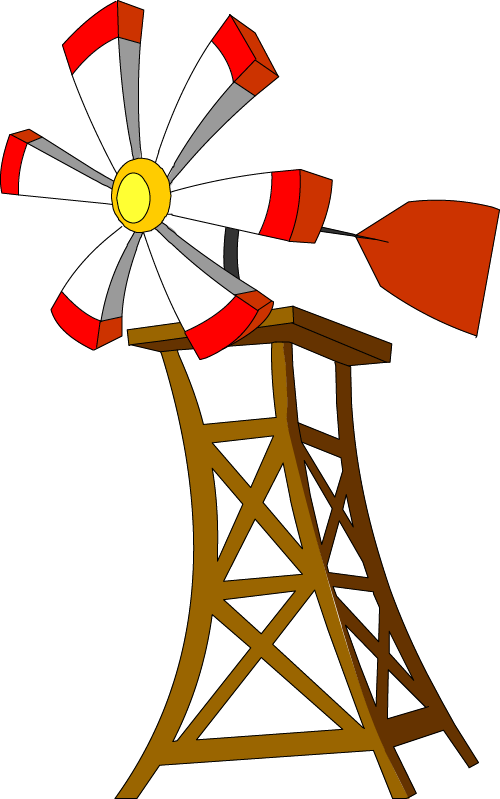 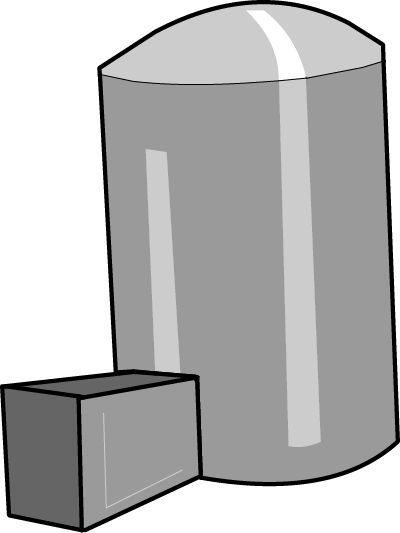 Sand and gravel layer
Back to the beginning
Sequence of Aquifers 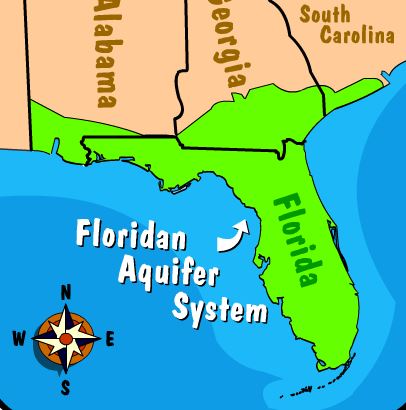 The Floridan aquifer is one of the largest aquifers in the United States. It extends across Florida and through parts of Georgia, Alabama, and South Carolina, but not Kansas. 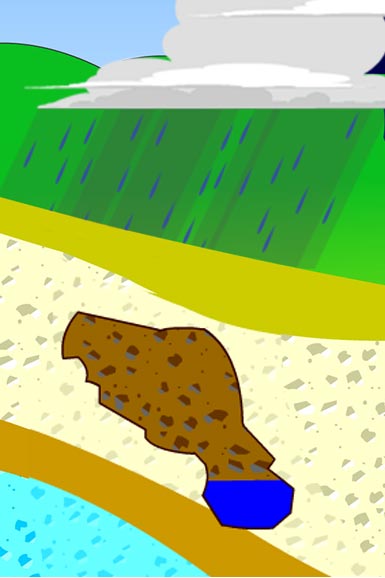 As rainwater percolates down, or seeps into the aquifer, natural acids in the rainwater wear away the limestone. When this occurs, large cracks and tunnels are formed in the limestone. The very slow moving water in the aquifer has the power to wear away parts of the Earth. This takes place in the limestone of Florida over hundreds of thousands of years. Most of the major caves of the world were created by this same kind of erosion. 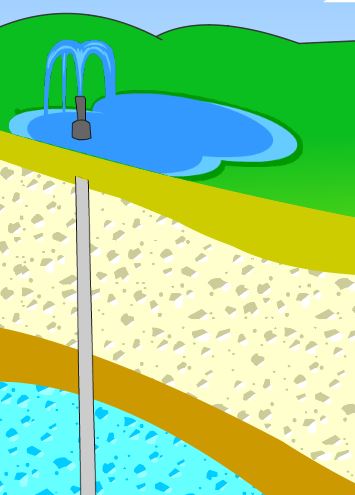 A free-flowing, or artesian, well is different from a regular well in that it doesn’t need a man-made pump to force the groundwater to the surface. Instead, free-flowing wells are drilled directly into the aquifer and the artesian pressure is high enough to make the water rise without using a pump. This artesian pressure is a natural pushing force created when rainwater refills the aquifer, causing the water level to rise on its own. 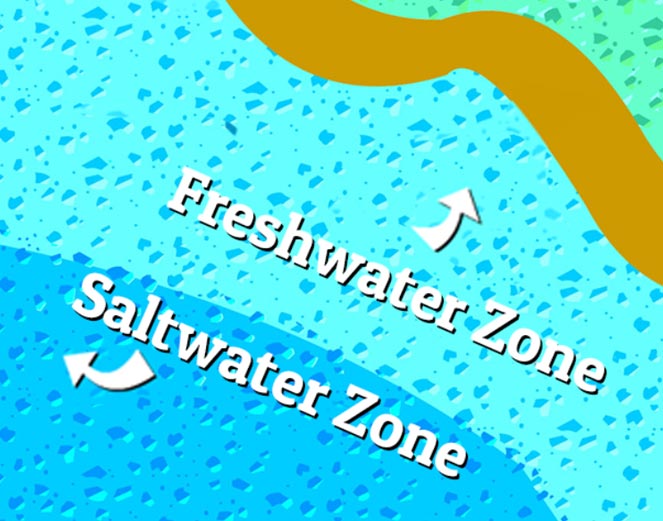 Above and below the Floridan aquifer are also various layers of water. Some layers contain freshwater, others contain salt water. These layers are called zones. 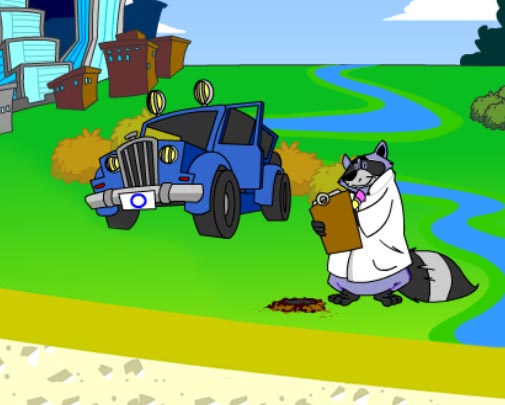 Scientists collect information to determine which regions of Florida are high- and low-recharge areas, the direction of groundwater flows, and how the aquifer is affected or changing. They do this by drilling wells deep into the ground and into the aquifer. The well levels are measured to tell about changes in the aquifer. 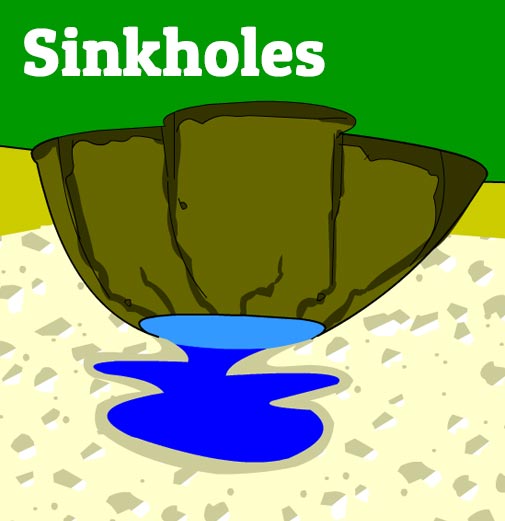 A sinkhole is a hole or depression in the ground caused by the wearing away of underground limestone. Although only a few sinkholes occur in Florida each year, more sinkholes appear here than in any other state. Many natural sinkholes can’t be prevented. However, those caused by human activity can be avoided.

During droughts, or times when it’s dry, water tables drop in the limestone and cavities. This can help cause sinkholes to form. Practicing water conservation can help keep water tables high and prevent human-caused sinkholes.

Sinkholes take a very long time to develop but can appear suddenly with no warning. In March 1998, a drilling company was drilling an irrigation well when a massive sinkhole began to open up. When the sinkhole finished forming, it measured 150 feet wide and 15 feet deep.

Shortly after this event, more than 700 sinkholes formed in the surrounding area. Each year in Florida, additional sinkholes form; many of Florida’s lakes are actually old sinkholes that have filled in with soil and water. 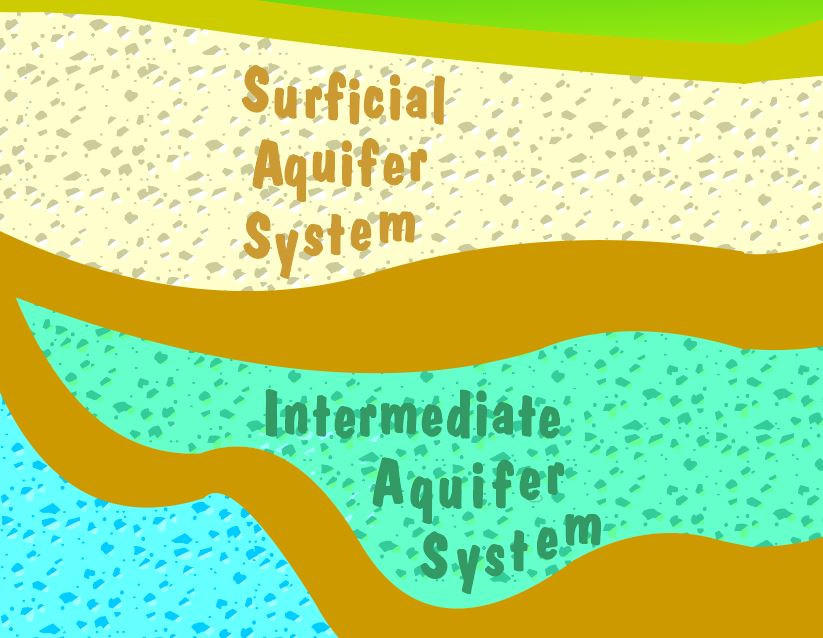 Above and below the Floridan aquifer are layers of sand, clay or gravel, which also hold water. These layers are known as surficial and intermediate aquifers. 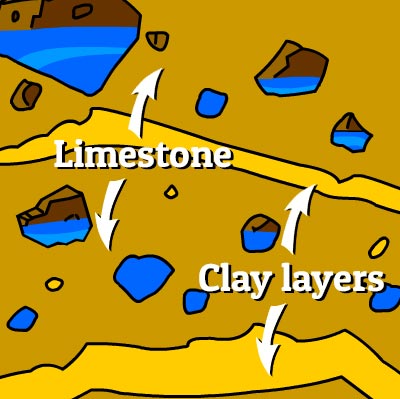 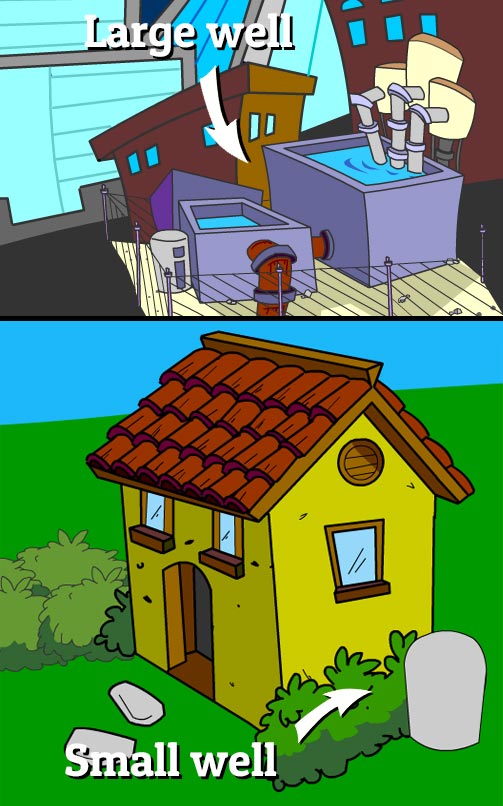 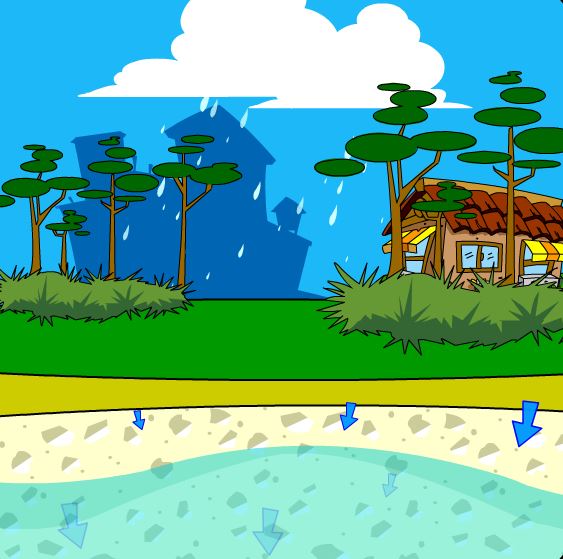 Floridians use billions of gallons of water from our aquifers each day. That’s a lot of water! So why doesn’t an aquifer become empty? Remember, water is a cycle. Water is replaced in the aquifer when rainwater falls, soaks into the ground, and refills the aquifer.

This process is called recharge. As water is used and not replaced through rainfall, water is pulled down from the earth’s surface. This can cause wetlands, rivers, and lakes to become drier, and in some cases, to even dry out. Our many springs are also affected.

The amount of water flowing out of springs becomes less, and some springs in Florida have even stopped flowing. 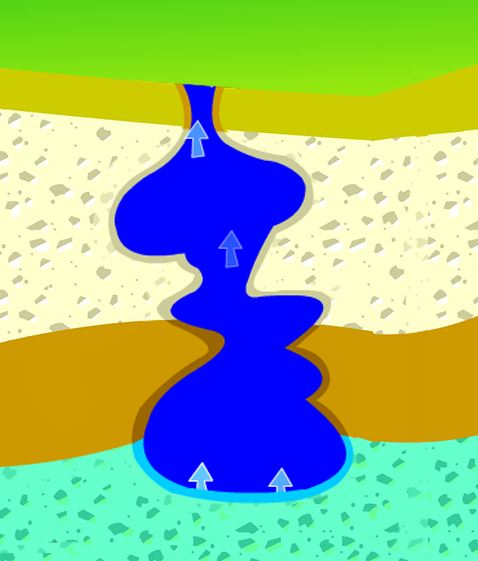 The large amount of water in the Floridan aquifer is under a great deal of pressure. This pressure can force water out of the aquifer and into new cracks and tunnels. Sometimes this water flows out naturally at the surface. These places are called springs. 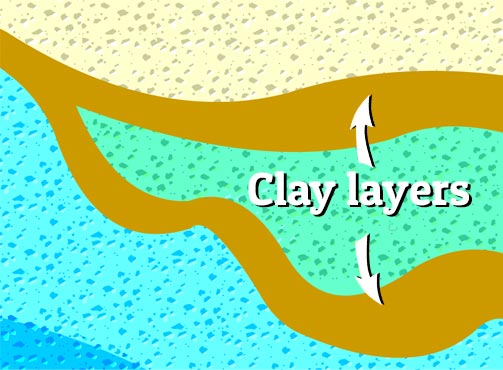 The layers of clay that are above and below the aquifer are called confining layers or confining zones because they confine, or hold, the water in the aquifer. 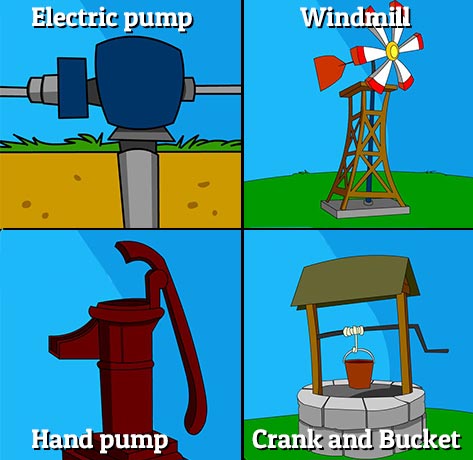 How does groundwater get to the surface of a well? Nowadays, an electric pump moves groundwater up from a well. With some wells, windmills provide the energy to pump groundwater. In older times, a hand pump might have been used to get water from the well, or even a crank and a bucket. Methods for getting water from a well vary around the world. 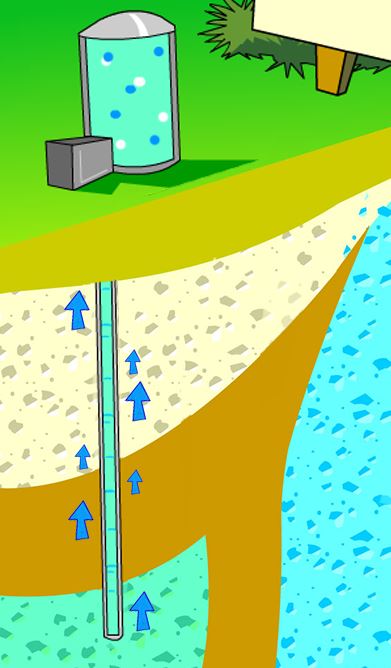 Wells are used to collect water from below the ground. 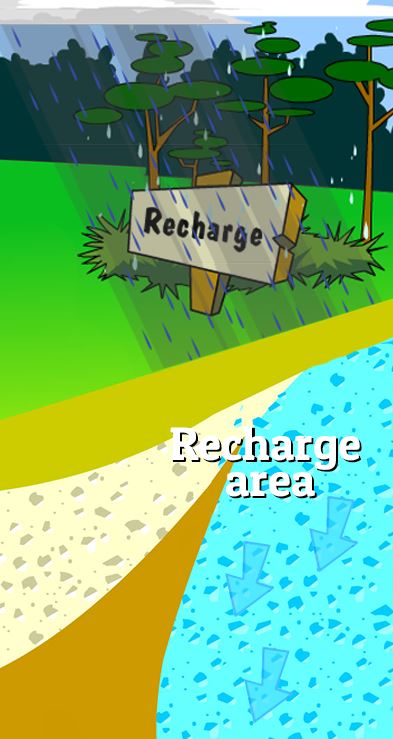 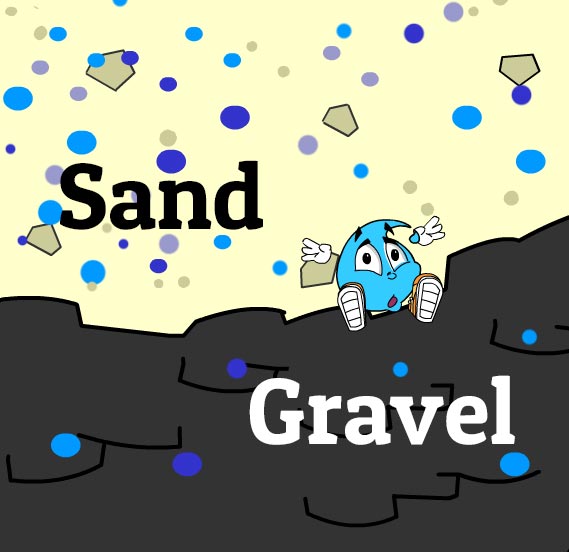 Sand and gravel act to filter or clean water of pollutants because of their ability to trap small particles and bacteria as the water passes through them.