The main source of water for most of us in northeast and central Florida comes from underground aquifers.

Aquifers can be thought of as vast underground, porous rocks that hold water and allow water to move through the holes within the rock. Aquifers can be composed of different types of earthen materials, such as sand, shell and limestone. Fresh and salt water fill the various sized holes in the rock. Freshwater generally fills the uppermost part of aquifers, while salt water is present at greater depths. 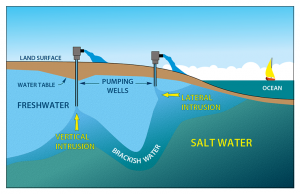 In some areas, water in an aquifer is confined or overlain by a thick layer of clay and then by more sandy soil extending up to the land’s surface. Where water in an aquifer is confined, the water is under pressure. The pressure allows water to rise in a well above the top of the aquifer and, in some places, water rises above the land’s surface without a pump, creating an artesian free-flowing well.

In some areas, water in the Floridan aquifer is not suitable for drinking without some type of chemical treatment because it contains various minerals or salts. Salt water, which is heavier than freshwater, can seep into drinking water wells — a process known as saltwater intrusion — making the water too salty to drink.

Salt water is present everywhere in the aquifer deep below the freshwater. Saltwater intrusion occurs when wells are drilled too deep or when too much freshwater is pumped from the aquifer, allowing salt water to replace freshwater.

The water stored in the aquifer is replenished, or recharged, by rainfall. On average, Florida receives 51 inches of rain each year. However, not all of the rain reaches the aquifer. About 38 inches evaporates or runs off the land into surface waters, like lakes, rivers and streams, before it has a chance to soak into the ground. This leaves, on average, 13 inches annually to recharge the aquifer in limited areas.

Scientists have determined — or “age dated” — the water in the Floridan aquifer as being between 17 to 26,000 years old. The age of the water varies because of the time it takes water to seep vertically and move horizontally through different types of soil. Sandy soils are most suited to allowing water to seep into the ground, while soils such as clay are more difficult to penetrate.

In addition to supplying drinking water to many of the millions of Florida residents and the state’s visitors, recreational opportunities are found in water that escapes from aquifers, known as springs. Springs are found in many places, including the Atlantic Ocean, lakes and rivers.