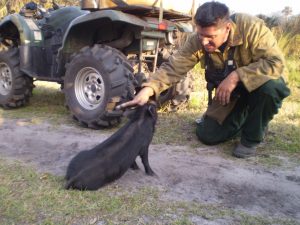 A District land manager pets a pot bellied pig that followed staff around at the District’s Seminole Ranch Conservation Area in Brevard County during a prescribed fire. The pig had been abandoned at the property, leaving it as prey for wild animals.

It was a black pig, weighing maybe 30 pounds. It was smaller than a Labrador Retriever but just as friendly.

“The pig was obviously someone’s pet,” says Pete Henn, a District Land Management Program Manager who participated in the burn. “It hung out with us all day almost as if it wanted to help us work. It was a charmer and loved to be petted.”

While it may sound like a heartwarming tale, the truth is that stray or abandoned animals are not an uncommon sight on District conservation lands. Their presence can cause damage to lands and impact the natural resources the District is working to protect. The agency owns or manages approximately 782,000 acres of land throughout its 18-county service area and virtually all District property is open to the public for activities that are compatible with conservation. On the flipside, this also means that there are plenty of remote areas where people abandon unwanted dogs, cats, and other domesticated and farm animals.

Both native and nonnative species can upset the balance in Florida’s natural ecosystems because they compete for food and shelter, and in many cases negatively impact native populations. Released animals may also spread diseases to native wildlife, nearby domestic animals, and to people.

Exotic pets often won’t survive when abandoned. For example, Flemish giant rabbits were abandoned at the District’s Fort Drum Marsh Conservation Area in Indian River County, where several died from the heat before being found by visitors who reported the animals to the District. Henn and Land Manager Amy Copeland responded to the scene where they found one rabbit already dead from the heat and another that had been killed by a wild animal.

District land managers have reported seeing a wide variety of animals ranging from stray dogs and bantam roosters to emu’s and the occasional horse. Of course, cast-off exotic animals in Florida are another story altogether.

There are many resources available to assist people with responsibly and humanely moving pets to new homes without resorting to illegally abandoning these animals on District lands or elsewhere.

The Florida Fish and Wildlife Conservation Commission has an Exotic Pet Amnesty Program that accepts exotic pets to reduce nonnatives being released into the wild by pet owners who no longer wish to or cannot care for their pet. Find information about the program, visit MyFWC.com/PetAmnesty or contact FWC’s Exotic Species Hotline at 888-Ive-Got1 (483-4681).

Staff found this group of domesticated pigs wondering around the District’s River Lakes Conservation Area (Brevard and Osceola counties) after they were abandoned at the conservation area.

Exotic pets often won’t survive when abandoned. For example, these Flemish giant rabbits were abandoned at the District’s Fort Drum Marsh Conservation Area in Indian River County, where several died from the heat before found by visitors who reported the animals to the District. 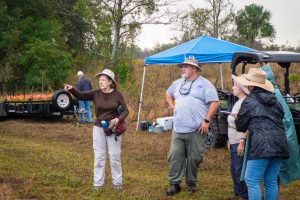 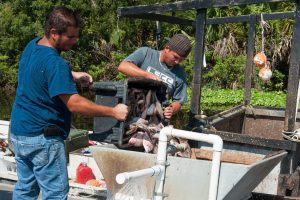 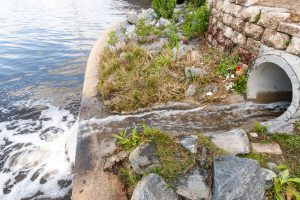 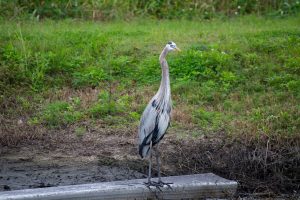 Lake Apopka is for the birds, bird lovers and the Christmas Bird Count