University of Florida student Sarah Anderson’s research of the blueberry bee took her to farms, urban areas and public lands of the district.

Not every bee is a honeybee. Far from it, actually.

Sarah Anderson will tell you that there are more than 20,000 distinct bee species worldwide and more than 320 species in Florida alone. But the University of Florida Ph.D. student is focused on a particular pollinator called the southeastern blueberry bee (Habropoda laboriosa).

As population growth in Florida gobbles up many of the state’s natural areas — places where wild evergreen blueberries can still be found — Anderson visited 21 sites in the hopes of determining how the blueberry bee and similar species of bees might be responding to land use changes. Some of the sites were agricultural; others were in urban areas, but two of the “natural” areas were St. Johns River Water Management District public properties: Longleaf Flatwoods Reserve in Alachua County and Lake George Conservation Area in Putnam and Volusia counties.

“Collecting bees from district lands is a critical element of this research because I need to compare bees in natural habitats to those in agricultural and urban areas,” Anderson explains. “I was thrilled that the district agreed to my request to study blueberry bees on its properties. This bee is now found in many different habitat types, but historically, it likely lived in the longleaf pine ecosystem and collected pollen from wild, evergreen blueberry plants. These natural, more remote areas are disappearing, so it was critically important to have access to district lands where this habitat can still be found.”

The district owns or manages more than 700,000 acres of land as part of its mission to protect and preserve water resources. The lands also offer the public access to some of Florida’s most beautiful and diverse natural areas: woodlands, lakes and rivers, marshes and open prairies. They’re also ideal for researchers like Anderson.

“As a science-based agency, we have a long history of working with the scientific community on critical research projects,” Shortelle says. “While the primary goal of District lands is to protect our water, we are pleased they offer the additional benefit of helping further understanding of our natural environment.” 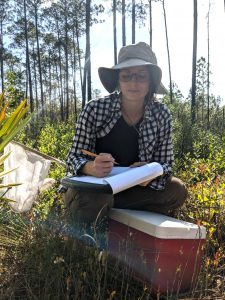 University of Florida student Sarah Anderson documents her findings about blueberry bees and their habitat during field visits.

Over the course of two months, Anderson canvassed her selected properties, recording the types of flowers she found within areas measuring 200 square meters. Within those plots, she identified 12 different species of native plants at Lake George Conservation Area and 18 at Longleaf Flatwoods Reserve.

At the same time, Anderson collected up to 30 pollen-laden bees at each site, placing the euthanized insects in containers for study back at the lab.

“We use a microscope to identify the pollen grains on the bee’s body and the bee’s body size as an indicator of its overall health,” she says. “This gives us a map of what plants this bee has visited.”

Determining the types of pollen blueberry bees collect is critical to the study. Pollen is the single source of protein in a bee’s life. The type of pollen and nectar a blueberry bee feeds to its offspring can play a role in determining their size as adults. A bee’s body size, in turn, impacts its reproduction output, Anderson adds.

“We’re trying to determine how bees are responding to land use changes,” she says. “Are the bees changing their foraging to common plants where blueberry plants aren’t available? If so, how do these other types of pollens affect their reproduction?”

Blueberry bees are masters of blueberry pollination, even better than honeybees. They move with efficiency and speed, pollinating both native blueberries and commercial blueberry crops. They’re known as “buzz-pollinators” (they create a high frequency buzz that causes otherwise inaccessible pollen to be released from the plant).

“They’re also important because they’re one of the earliest pollinators,” Anderson adds. “Unlike honeybees that can be seen almost year-round in Florida, the southeastern blueberry bee is active as an adult only two months out of the year during the very early spring.”

With the blueberry bee’s brief pollinating season now having passed, Anderson will analyze the data she’s collected and prepare for a second round of site visits in spring 2021. She hopes her research will help determine if Florida’s changing landscape is impacting the future of the blueberry bee which, in turn, could impact Florida’s wild and domestic blueberries.

“I’m grateful for access to the district’s Lake George Conservation Area and Longleaf Flatwoods Reserve,” Anderson says. “Without them, I would have no baseline from which to compare blueberry bees in urban and agricultural settings against these natural areas where wild blueberry species can still be found.” 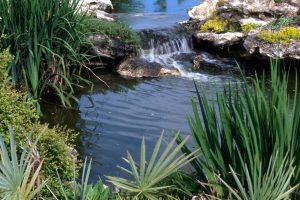 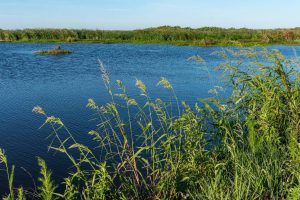 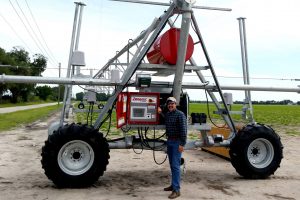 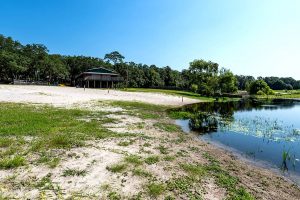