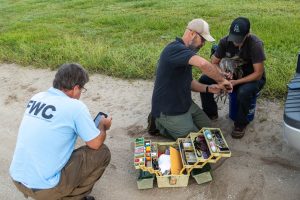 Tim Dellinger carefully fits a leg band on a Sandhill crane as Miranda Watford cradles the bird. Ron Bielefeld records information about the crane on a data-collection app.

Coral skies rouse the sprawling community of Viera in Brevard County from its slumber. In the distance, clustered rooftops mark the transition between civilization and agricultural holdings — sod fields, mostly — before the open land yields to River Lakes Conservation Area, 36,000 acres of wild Florida owned and managed by the St. Johns River Water Management District.

A silver Ford truck creeps along the dusty access road to River Lakes. In the truck are three researchers with the Fish and Wildlife Research Institute (FWRI), the research arm of the Florida Fish and Wildlife Conservation Commission. The team spies its quarry: a pair of sandhill cranes, among the largest birds in Florida. The Ford stops, its brake lights glowing. A percussive blast shatters the morning idyll. Two of the biologists sitting in the bed of the truck have launched a net to capture one of the birds. They leap from the truck and across the field to retrieve the sandhill crane.

Miranda Watford, a biological scientist, cradles the crane while Tim Dellinger, an FWRI research scientist and lead investigator on the study, attaches a radio transmitter and colored leg bands (used for visual identification) to the crane’s leg. The bird is surprisingly calm.

“We’re working with a small portion of the overall sandhill crane population,” says Ron Bielefeld, an associate research scientist and co-lead on the study. “Sandhill cranes are becoming squeezed into little bits of natural remaining habitats or forced to adapt to suburban habitats. Without these data we don’t know how the cranes will react to the change in their habitat. Without these data we are blind.”

Dellinger says the FWRI tracking study began in 2017, with enough funding available to track 34 birds with radio transmitters and up to 100 birds with leg bands. So far, they’ve banded about 55 birds. The study area reaches as far west as Pasco County, to the cities of east to Melbourne and Sebastian, north to Marion County and south to Lake Placid.

The study received a shot in the arm in fall 2018 when FWRI and the district reached an agreement that expanded the study area to include seven district properties with large and diverse avian populations: Lake Apopka North Shore and Emeralda Marsh, Blue Cypress, Lake Norris, River Lakes, Sunnyhill and Three Forks Marsh conservation areas.

“The district has a lot of land that is good crane habitat,” says Dellinger, who has studied sandhills for almost a decade. “All previous Florida sandhill crane research has been done in improved pastures. There hasn’t been much work done in suburban areas and conservation lands. This project offers us a chance to learn about the cranes in heavily populated areas and large, mostly undisturbed habitats in Florida. This is an exciting opportunity.” 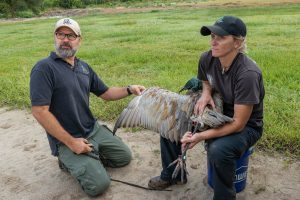 FWC researchers Tim Dellinger and Miranda Watford do a quick health inspection of a Sandhill crane prior to fitting it with a leg band as part of a study of the threatened species.

Sandhill cranes live and breed in open habitats. You’ll spot them in open prairies, bogs and marshes. The district properties in the study offer that ideal habitat. River Lakes, for example, boasts thousands of acres of open land adjacent to the St. Johns River and Lake Winder.

“The cranes prefer open habitat because it allows them to keep an eye out for predators,” Dellinger says. “They’re relatively easy to spot if you visit the right places.”

“Our stewardship of natural systems is one of the four core missions of this agency,” Shortelle says. “By including district properties in its sandhill crane study, FWC contributes expertise and institutional knowledge that is mutually beneficial to both agencies. FWC gains a wealth of knowledge about the movement of these threatened creatures which, in turn, guides us in managing our properties to their fullest potential.”

Cranes fitted with radio transmitters provide a wealth of information to the researchers about their movement throughout Florida. The transmitters, mounted on either the back or leg of a bird, relay GPS locations every half hour, Dellinger says. 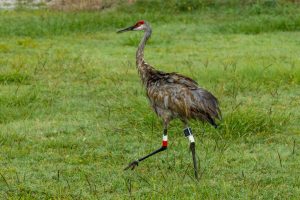 An adult Sandhill Crane struts through a field at the district’s River Lakes Conservation Area, showing off its new leg band and GPS tracker.

“That’s 48 locations every day for each bird and they’re accurate within a few meters,” he adds. “Using this technology, the birds basically track themselves.”

The study is scheduled to end in June 2021, providing the researchers with vital information that will aid FWC in managing these majestic birds. Adds Dellinger, “The transmitters are solar and are continuing to provide data beyond their 24-month battery life, so we will continue to receive data past the life of the project.”

“Crane life in urban/suburban and conservation lands is unknown, so this study is answering questions about productivity and survival in these areas,” Dellinger says. “We will compare survival, productivity, and movements between and within these areas and to past studies on improved pasture. We’re thankful that the St. Johns River Water Management District is once again providing its full support in this worthy endeavor.”