Working the land, conserving the water

From where they’re standing, Todd Gentry and Austin Spivey have a commanding view of Cherrylake, a 1,000-acre ornamental tree farm in Groveland that graces the surrounding hills in symmetrical rows of green. It’s a surreal experience for Floridians accustomed to the flat landscape that characterizes most of the Sunshine State. 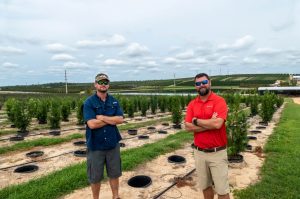 Austin Spivey (left) and Todd Gentry help operate Cherry Lake, a 1,000-acre ornamental tree farm in Groveland. They show how the St. Johns River Water Management District’s agricultural cost-share program afforded the nursery the opportunity to adopt technology to reduce the farm’s water use by more than a million gallons of water a day.

Gentry, director of production at Cherrylake, and Spivey, a production manager, are too busy to enjoy the hilltop vista. They’re focused on explaining how the St. Johns River Water Management District’s agricultural cost-share program afforded Cherrylake the opportunity to adopt technology to reduce the farm’s water use by more than a million gallons of water a day.

Cherrylake is the largest grower of ornamental trees in the state. Staples of Florida landscaping — crepe myrtles, magnolias, oaks, cypress, maple and podocarpus — grow in specialized pots that prevent them from becoming rootbound. Each pot is a miniature habitat that must receive the appropriate amount of water and fertilizer for the tree to survive.

Spivey inspects a newly upgraded irrigation system that distributes water through micro-sprayers that tend to individual trees. It wasn’t always so efficient, he says.

“Our new system allows us to control how much water is distributed at each space,” he says. “In the past, we were watering the ground whether there was a plant or an empty space because we only had control over the line, not each space. Our watering has gone from a shotgun blast to a microscope in accuracy. It’s a blessing.”

Since 2016, the district has awarded Cherrylake approximately $521,000 in cost-share funding that the company has invested toward equipment that maximizes the efficiency and accuracy of its water and fertilizer use. Suzanne Archer, the district’s Agricultural Cost-Share Program Coordinator, says Cherrylake’s upgrades have translated to 1.3 million gallons a day of water savings and annual nitrogen and phosphorus reductions of 15,012 and 2,269 pounds respectively.

“Cherrylake strives to be a steward of the land and a role model for best management practices,” says Archer, who was raised on a farm in Iowa. “This program is a public-private partnership that promotes sustainability. It helps growers tackle expensive water conservation projects that they otherwise could not afford throughout our 18-county jurisdiction. “

Agriculture is big business in Florida. Second only to tourism in economic importance, Florida’s growers and ranchers gross $160.7 billion annually, according to the University of Florida’s Institute of Food and Agricultural Sciences.

The district’s agricultural cost-share program is helping growers like Cherrylake work smarter. Since 2015, the program has funded 122 projects totaling $15.7 million, providing growers with funding assistance for irrigation retrofits, rainwater harvesting, soil mapping and variable rate fertilizer spreaders. As a result, farmers, growers and ranches in 11 counties are saving water and reducing nutrient runoff, nutrients that could otherwise harm nearby rivers, lakes and streams.

“It’s a tough business to raise cattle, citrus or row crops and agricultural interests are sometimes criticized for their water consumption,” she says. “The continued commitment from these growers helps to protect the environment by cutting back on water use and reducing nutrient runoff from farming operations.”

Cherrylake is a shining example of a company in relentless pursuit of environmentally friendly technology. District cost-share grants have helped fund a state-of-the-art irrigation system guided by a miniature weather station that can be operated remotely from a phone or laptop, as well as an “intelligent” sprayer developed by the U.S. Department of Agriculture that has already shown a 40 percent reduction in the amount of fertilizer chemicals and pest management sprays used.

“The technology added to the sprayer maps a profile of each tree and directs the 32 spray nozzles to individually adjust themselves to treat trees based on their size and shape,” Gentry says. “It also knows if there’s an empty space instead of a tree and directs the nozzle not to spray at all. In addition, this new equipment gathers profile data of all the trees so that we can understand and audit our inventory.”

Cherrylake is working smarter. In addition to slashing its water consumption, the farm’s electric bill dropped by about $20,000 in 2019 because the water pumps aren’t running as frequently, Spivey adds.

At the district’s southern reaches, citrus is king. Indian River Citrus is synonymous with fruit formed by a perfect blend of soil enriched by limestone and a temperate climate. The growing region’s colorful history can be traced to Captain Douglas Dummitt, who smelled the fragrance of orange trees while sailing along Florida’s east coast in 1807 and sought to secure some for his not-yet-established homestead, according to the Indian River Citrus League. 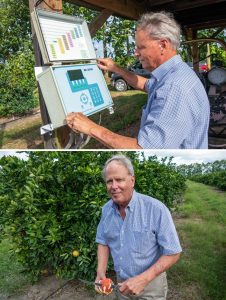 Thanks to the St. Johns River Water Management District’s agricultural cost share program, growers like Cody Estes in Indian River County are using technology to save millions of gallons of Florida’s water.

Today, the Indian River Citrus District continues to endure, despite the historic freezes of the 1980s, root-soaking hurricanes, citrus canker and citrus greening, a citrus tree-killing disease without a cure.

Cody Estes, owner of Estes Citrus, Inc., knows what it’s like to battle Mother Nature. He’s a fourth-generation grower whose groves include 830 acres west of Vero Beach, where the city dissolves into endless skies and miles of citrus blossoms. His groves produce gorgeous red grapefruit, seedless tangerines and navel oranges.

Estes credits the district for helping him radically improve how he operates his groves. He has completed four cost-share projects since 2018, with the district providing $244,000, or 75 percent, of the necessary funding.

Estes used the district’s cost-share contribution toward incorporating high-tech automation into his irrigation system. He began by converting 160 acres of trees to an automated system and has since expanded to 510 acres.

“Once we gained experience using automation and learning how to control it, we saw the value in it,” Estes says. “It just made perfect sense.”

When it comes to feeding and watering his trees, Estes is now dialed in. He crouches beneath a tree to point out a lysimeter. The device measures the amount of actual evapotranspiration by the trees — the amount of precipitation the area receives and the amount lost through the soil — so that Estes can easily calculate the amount of water and nutrients his beloved trees need to remain healthy.

“There’s only 10 inches of root zone to work with,” he says. “This is sand, so water and nutrients move through it pretty rapidly. We might look at it and determine that we need to run short cycles so we don’t push the nutrients through the root zone before the tree can absorb them.”

Thanks to his technological upgrades, Estes doesn’t have to rely solely on the local weather service to make decisions. He can dictate irrigation and feeding cycles from his phone or a desktop computer back at the office. A weather station in the groves provides soil, moisture, temperature, salinity and rainfall readings.

“Before automation, all of this was done manually,” he says. “Someone had to drive out here and open and close the pump stations. That person had to be sure the correct valve was open and change the values to the different irrigation zones every few hours. Out here we have 10 stations, so it required a full-time position to manage the process. Of course, fertilizer was also dispensed manually. The time we’re saving by running the system efficiently is now used to keep the system in good shape and ensure that we’re not overwatering or overfertilizing.”

District Governing Board Member Doug Bournique calls the district’s cost-share program “one of my favorite programs at the district.” The topic is close to his heart. He is executive vice president of the Indian River Citrus League, where he has served on committees for both the St. Johns River and South Florida water management districts, including the St. Johns District’s Agriculture Advisory Committee.

“Technology is coming along quickly in our industry,” Bournique says. “It’s changing the playbook I grew up on. Technology will change how we calculate who is being good to the environment.”

Estes Citrus is relentless in its efforts to improve operations. In 2011, the Indian River Soil and Water Conservation District Board of Supervisors chose Cody Estes and manager Jim Hoffman for its Conservation Cooperator of the Year award. Among the innovations cited: the implementation of a conservation plan to better utilize water resources and reduce energy use by irrigating within a recommended schedule and planting windbreaks to reduce the potential movement of airborne pathogens to and from the groves.

The district’s agricultural cost-share program is helping Florida’s growers continue to be stewards of the state’s water and land, thanks to technological breakthroughs.

“My grandfather planted our first citrus in Polk County and we started planting here in the 60s,” Estes says. “We’re here for decades; we’re not here for a year. We have every reason to protect our water resources now and in the future.”