A Journey on the St. Johns River: Catching fish and growing citrus

This is the second part of a series about the St. Johns River. Each installment explores one of the river’s three distinct basins.

From the air, it’s apparent that the headwaters of the Upper St. Johns River Basin blend the natural world with the manmade: Sweeping sawgrass marshes and cypress swamps envelop the calculated geometry of reservoirs and canals, much of it contained within Blue Cypress Conservation Area. The most distinctive landmarks within this conservation area are the Fellsmere Water Management Area (FWMA) and an adjacent rectangular lake officially named the St. Johns Water Management Area. Locals call it the Stick Marsh/Farm 13.

At ground level, the FWMA boat ramp parking lot pulses with activity as anglers line up to launch their boats in pursuit of largemouth bass and other sportfish. The 10,000-acre lake is actually two connected lakes: Headwaters Lake and Egan Lake.

James Breeden and Glenn Ritter launch their sleek, gray Triton bass boat into the glassy water, hopeful for at least a few fish strikes. Breeden, a Florida native who lives in Cocoa, grew up in West Melbourne and has fished the St. Johns River his whole life. He bemoans the fact that new fishing areas like FWMA become tougher to fish once the fish have been hooked a few times. But it’s all part of the challenge.

“It was hot when (FWMA) first opened,” he says. “The fish are still here but they got smart after a few months. We’re glad to have this area to fish, though.”

Click the map below to see images of the Upper St. Johns River Basin.

“The Fellsmere Water Management Area provides alternative water supplies and flood control while expanding upon our vast public recreational opportunities in the upper basin,” says St. Johns River Water Management District Executive Director Dr. Ann Shortelle. “The upper basin project has breathed new life into the headwaters of this river and I believe it will be one of the greatest legacies of this agency and the many partners who worked to make it possible.”

It’s not only anglers who are drawn to the upper basin. Birders armed with telephoto lenses and binoculars walk the levees to observe and photograph eagles, hawks, kites, ducks and wading birds. On some mornings, folks gather in lawn chairs to chat and watch the antics of hundreds of roseate spoonbills occupying a tree island at the Fellsmere Recreation Area parking lot. Others prefer to walk or ride bicycles atop the levees, always on the lookout for lazing alligators or the occasional deer.

FWMA may be the newest feature in the upper basin, but the adjacent St. Johns Water Management Area has achieved legendary status as a world-class bass fishing lake. In fact, the Bass Pro Shop in nearby Palm Bay announces itself in bold letters as the “Stick Marsh Outpost” in a nod to the reservoir’s local moniker. The lake has enjoyed a starring role in countless sportfishing television shows and tournaments. But that’s not why the District built this remarkable water body.

Constructed in 1987, the 6,500-acre water management area increased the amount of water stored in the upper basin during wet seasons while improving water quality by isolating and treating stormwater runoff from citrus farms east of the river’s headwaters. The water management area acts like a filter, capturing phosphorus and other nutrients that would otherwise reach the river’s natural flow and degrade its water quality.

The Stick Marsh is an impressive body of water, measuring just over 10 square miles of open water, equivalent in size to the downstream town of West Melbourne. The view from the levee that contains this manmade marvel reveals vast open water that can turn to white caps on windy days. It’s not uncommon to see bald eagles and ospreys fish its water. 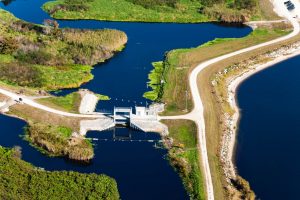 Resiliency is embedded in our core missions 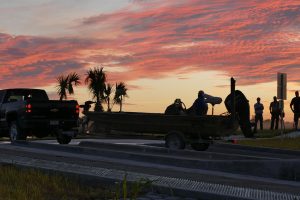 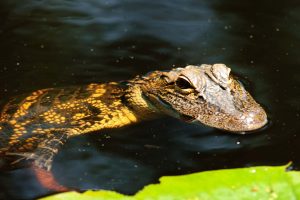 The water management area has also come to play a role to respond to demands for new water sources by storing more water within the project area during the wet season and releasing it downstream at a steady rate during the dry season, according to Hector Herrera, a District senior engineer who knows the upper basin like an old friend. On this day he serves as our airboat guide as we explore the river.

“We also reduce the dependency on groundwater for agricultural irrigation by providing surface water as an alternative source,” Herrera adds.

While the original goal of the upper basin project was to provide regional flood protection to Indian River and Brevard counties, it also provided benefits “that we didn’t count on,” says District Governing Board member and Florida native Doug Bournique, who is also executive vice president of the Indian River Citrus League.

“The upper basin project has saved hundreds of jobs and protected the agricultural base here,” Bournique says. “For agriculture, this project has been phenomenal. I don’t think any of us in the citrus industry felt that the project would provide so many benefits.”

Runoff from nearby citrus groves and livestock pastures is captured, treated and stored in water management areas, protecting adjacent marshes from the harmful effects of high-nutrient agricultural runoff. The stored runoff can then be reused for farm irrigation and freeze protection further protecting the marshes from excessive surface water withdrawals. The vast marshes and water management areas literally raise the air temperature in the surrounding groves.

Prior to the creation of the upper basin project, Indian River County growers were as susceptible to hard freezes as growers in other counties.

“It’s been hard on growers,” Bournique says. “We’ve had to contend with diseases and freezes. The availability of water for irrigation and freeze protection gives us more assurance that our investments will pay off. Water is the game changer.”

It’s time to head north. Our tour guide Herrera fires up the airboat and guides it toward a canal that seemingly stretches into eternity. Somewhere to the west of us lies Jane Green Creek, a haunting swamp and creek named after a woman who helped settle the area in the 1870s. There’s not much to look at during a canal run, just the grassy banks flanked by alligators that methodically slip into the water at the sound of the approaching airboat. An occasional ibis or heron glides overhead.

A few miles north, we’re west of the city limits of Palm Bay, the largest city in Brevard County. We’re nearing the area where the St. Johns River transforms from a marsh to a truly defined river and next time, we’ll learn why the storied waterway is called the “river of lakes.”

Part three will explore the remainder of the upper St. Johns River, from Three Forks to the area where the Econlockhatchee River flows into the St. Johns River.